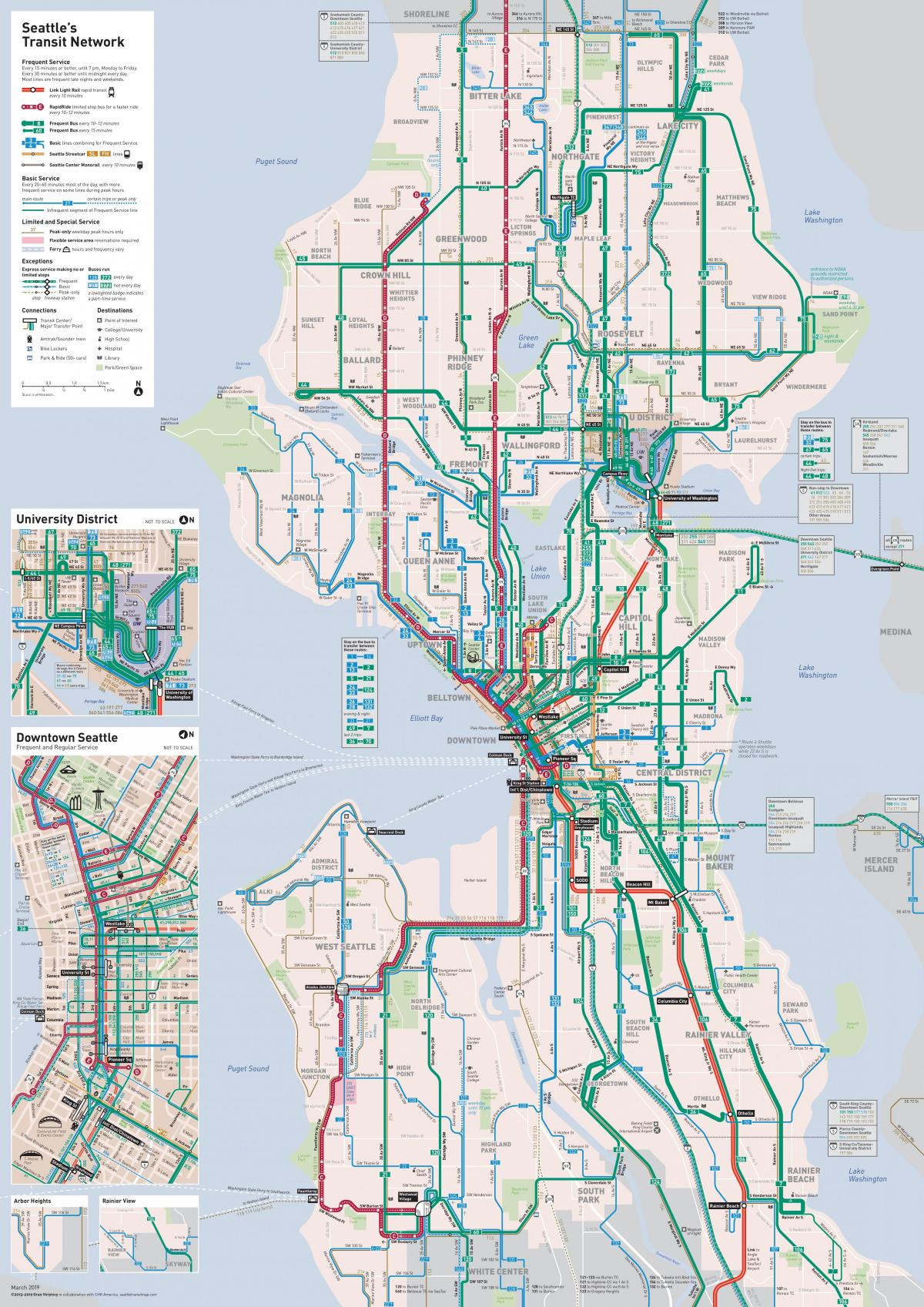 As with almost every other city in western North America, transportation in Seattle is dominated by automobiles, although Seattle is just old enough that the city layout reflects the age when railways and streetcars (known locally as "trolleys") dominated. These older modes of transportation made for a relatively well-defined downtown and strong neighborhoods at the end of several former streetcar lines, most of them now bus lines as its shown in Seattle transport map. Seattle streets are laid out in a cardinal directions grid pattern, except in the central business district where early city leaders Arthur Denny and Carson Boren insisted on orienting their plats relative to the shoreline rather than to true North.

Because of the isthmus-like geography of the city (wedged between Lake Washington and Puget Sound), and the concentration of jobs in certain parts of Seattle, much of the movement in the Seattle metropolitan area is through the city itself. North-south transportation is highly dependent on Interstate 5, which connects most of the major cities on the Puget Sound with Portland, Oregon, and Highway 99, which leads to Vancouver. Also heavily used is State Route 99, which includes the Alaskan Way Viaduct in downtown Seattle as you can see in Seattle transport map. Because of seismic instability, there are plans to rebuild the viaduct, or relocate the traffic to surface streets and an expanded transit system.

Transportation to and from the east is via State Route 520 Evergreen Point Floating Bridge and Interstate 90 Lacey V as its mentioned in Seattle transport map. Murrow Memorial Bridge and Third Lake Washington Bridge, all over Lake Washington. Those bridges are the first, second, and fifth longest floating bridges in the world, respectively. State Route 522 connects Seattle to its northeastern suburbs. Unlike most North American cities, water transportation remains important. Washington State Ferries, the largest ferry system in the United States and the third largest in the world, operates a passenger-only ferry from Colman Dock in Seasttle Downtown to Vashon Island, car ferries from Colman Dock to Bainbridge Island and to Bremerton, and a car ferry from West Seattle to Vashon Island to the community of Southworth. Seattle was once home to the Kalakala, a streamlined art deco-style ferry that plied the waters from the 1930s to the 1960s.