You can find on this page the Seattle topographic map to print and to download in PDF. The Seattle elevation map present the topography, river and relief of Seattle in Washington - USA.
Seattle city lies on several hills, including Capitol Hill, First Hill, West Seattle, Beacon Hill, Magnolia, Denny Hill, and Queen Anne as you can see in Seattle topographic map. The Kitsap and the Olympic peninsulas along with the Olympic mountains lie to the west of Puget Sound, while the Cascade Range and Lake Sammamish lie to the east of Lake Washington. 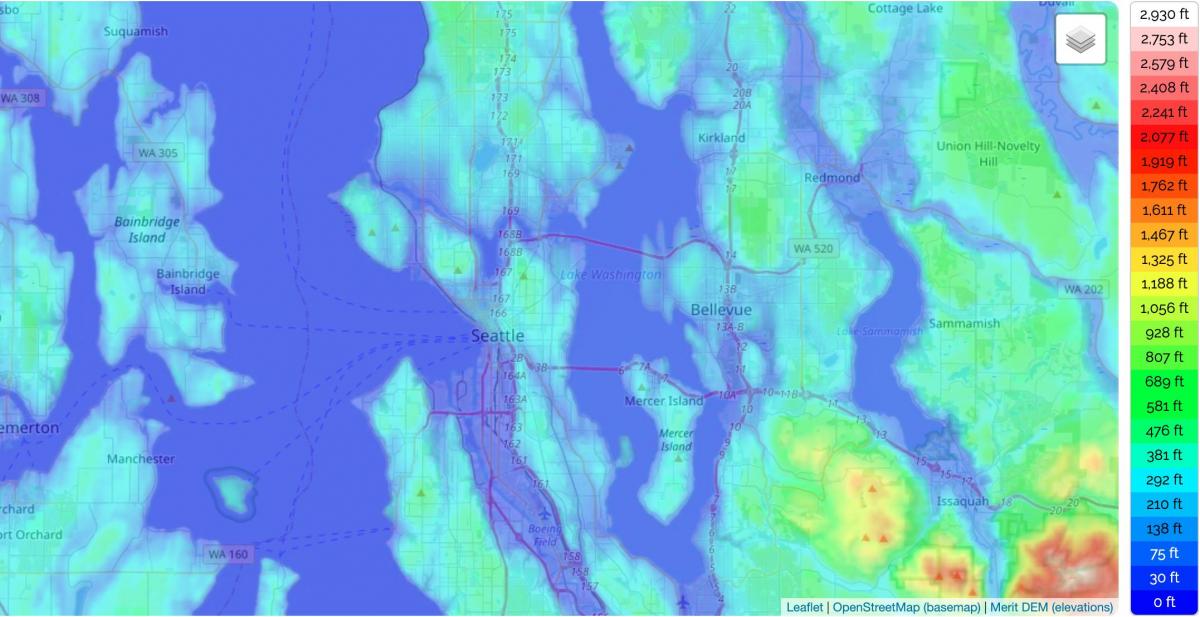 The latitude and longitude coordinates (GPS waypoint) of Seattle are 47.6062095 (North), -122.3320708 (West) and the approximate elevation is 177 feet (54 meters) above sea level as its shown in Seattle elevation map. Many major cities around the United States, especially those that are situated in coastal locations like Seattle, tend to have quite low elevations as they are so near the sea. This is true of places like New York City and Los Angeles for example. Back in the state of Washington, the highest town is Waterville, located in Douglas County and sitting at an elevation of 2,622 feet (799 m), and the state itself has a mean elevation of 1,700 feet (520 m), so Seattle elevation is much lower than the state average.

Mountains, including 14,410-foot (4,392-metre) Mount Rainier and the distant peaks of the Cascade and Olympic ranges, frame the skyline as its mentioned in Seattle elevation map. The city centre lies approximately 110 miles (180 km) to the south of the U.S.-Canadian border, and Seattle enjoys a long-standing historical and commercial connection with the Canadian province of British Columbia. The city also lies about one-third of the way to the Pacific Ocean from the Snoqualmie Pass of the Cascade Range, which provides an overland route into the interior of the Pacific Northwest.

The elevation of a town, city, monument, mountain, or other key location around the world tells us how high it is in relation to sea level and can be a very important geographical statistic for a variety of reasons. Measuring elevation in Seattle is challenging as the city has some places that are much higher up than others. The highest point in the city of Seattle has an elevation of 520 feet (158 m) as you can see in Seattle elevation map, while the lowest point is out on the water, which has the same elevation as sea level. The average elevation of Seattle is generally calculated to be around 170 feet (52 m).