You can find on this page the Seattle streets map to print and to download in PDF. The Seattle roads map presents the road network, main roads, routes and motorways of Seattle in Washington - USA.
The streets of the downtown area—which extends roughly north-south from Denny Way to Yesler Way, and east-west from Broadway to Elliott Bay—are arranged in a grid pattern. Running parallel to the shoreline (beyond the first two streets, Alaskan Way and Western Avenue as you can see in Seattle streets map) are numbered avenues; named streets run perpendicular to the avenues. 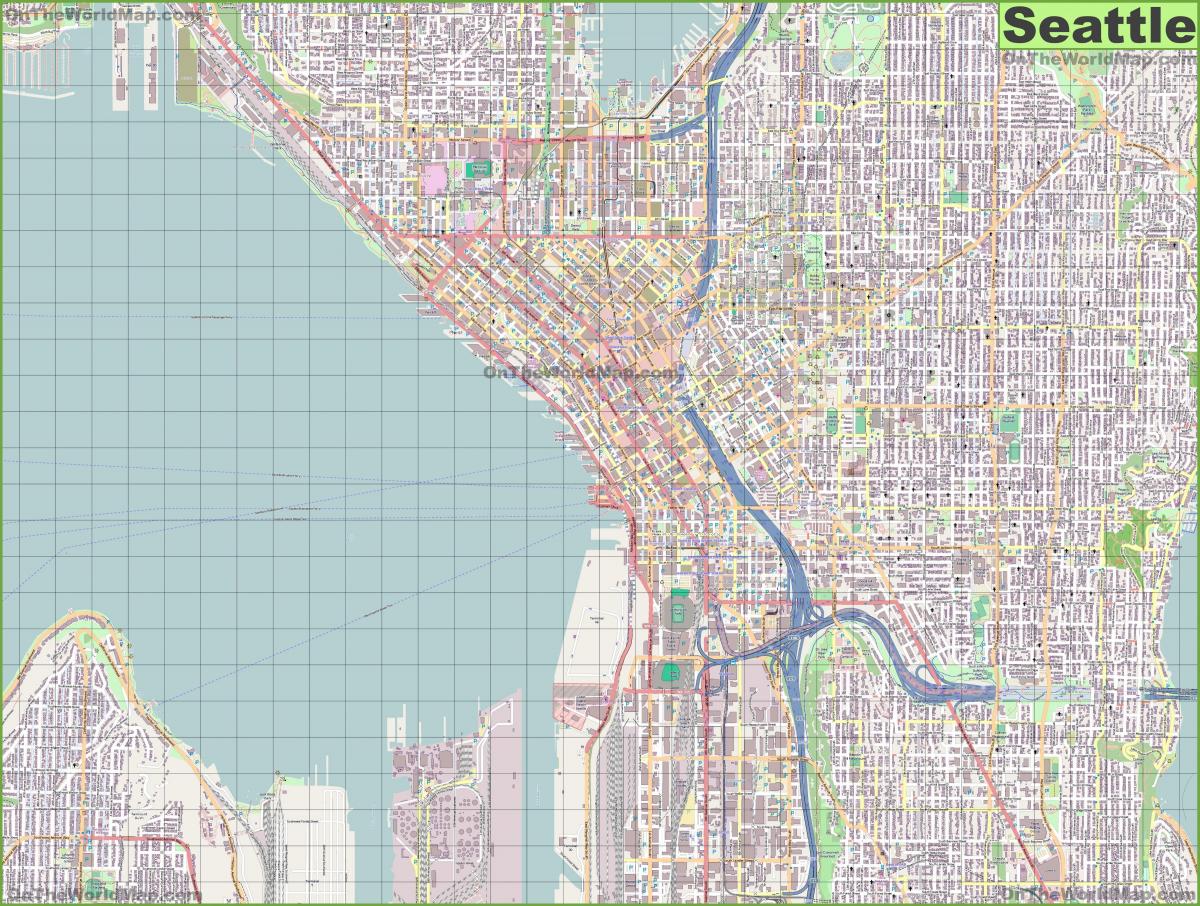 Up on Capitol Hill, Broadway runs from Volunteer Park all the way to Yesler Way. Hosting both Seattle University and Seattle Central College, Broadway is one of the main thoroughfares for the area. Chosen for the Capitol Hill stop along the Light Rail, Broadway was also recognized as the most logical destination for the relatively recent Seattle Streetcar. Stretching south from Olympic Sculpture Park all the way to Pioneer Square, Alaskan Way brings its voyageurs along the Seattle Waterfront. Other than providing exceptional views of Elliott Bay and the Olympic Mountains, the street—which is also great for cycling—provides access to Ye Olde Curiosity Shop, the Seattle Aquarium, the Seattle Great Wheel, and the Colman Dock, where people can catch ferries across Puget Sound and beyond (see Seattle streets map).

Practically connecting the Puget Sound to Lake Washington in a straight shot, Denny Way connects a few crucial parts of the city. To the west, Denny runs between the Olympic Sculpture Park and the Seattle Center as its shown in Seattle streets map, with highlights being Chihuly Garden and Glass, MoPOP, the Pacific Science Center, Key Arena, Memorial Stadium, and—of course—the Space Needle. Passing under the monorail, past Denny Park, and over I-5, Denny Way continues into Capitol Hill where it intersects with Broadway—right next to Dick. Pike Street—the namesake of the famed Pike Place Market. Starting at the cobblestone streets of the Market, Pike Street runs through the shopping district of downtown on its way to Capitol Hill. Up there, Pike is the street for nightlife, with some of the top-notch clubs and music venues being Neighbours Nightclub, Neumos, Comet Tavern, and Unicorn. The street is also home to incredible eateries, such as HoneyHole and Capitol Cider, as well as local breweries, including Elysian Capitol Hill Brewery and Redhook Brewlab.

Similar to Alaskan Way on the west side of Seattle, Lake Washington Boulevard runs along the water, but on the east side of the city, along (surprise, surprise) Lake Washington, with a less industrial, more residential vibe. On clear days, the sparkling lake will set the mood for the Cascade range and Mt. Rainier in the not-so-far distance. The best part of the road though, Lake Washington Boulevard East, meanders through the stunning Washington Park Arboretum and the Seattle Japanese Garden as its mentioned in Seattle streets map. Pine Street parallels Pike Street from Pike Place Market to Capitol Hill, before slowly fading into the residential life. Between 3rd Avenue and 7th Avenue, Pine Street is the best-known shopping section of downtown Seattle, with Macy (in the original flagship building for the local Bon Marché), Westlake Center, the first Nordstrom, and Pacific Place. On the way to Capitol Hill is Seattle Paramount Theatre. 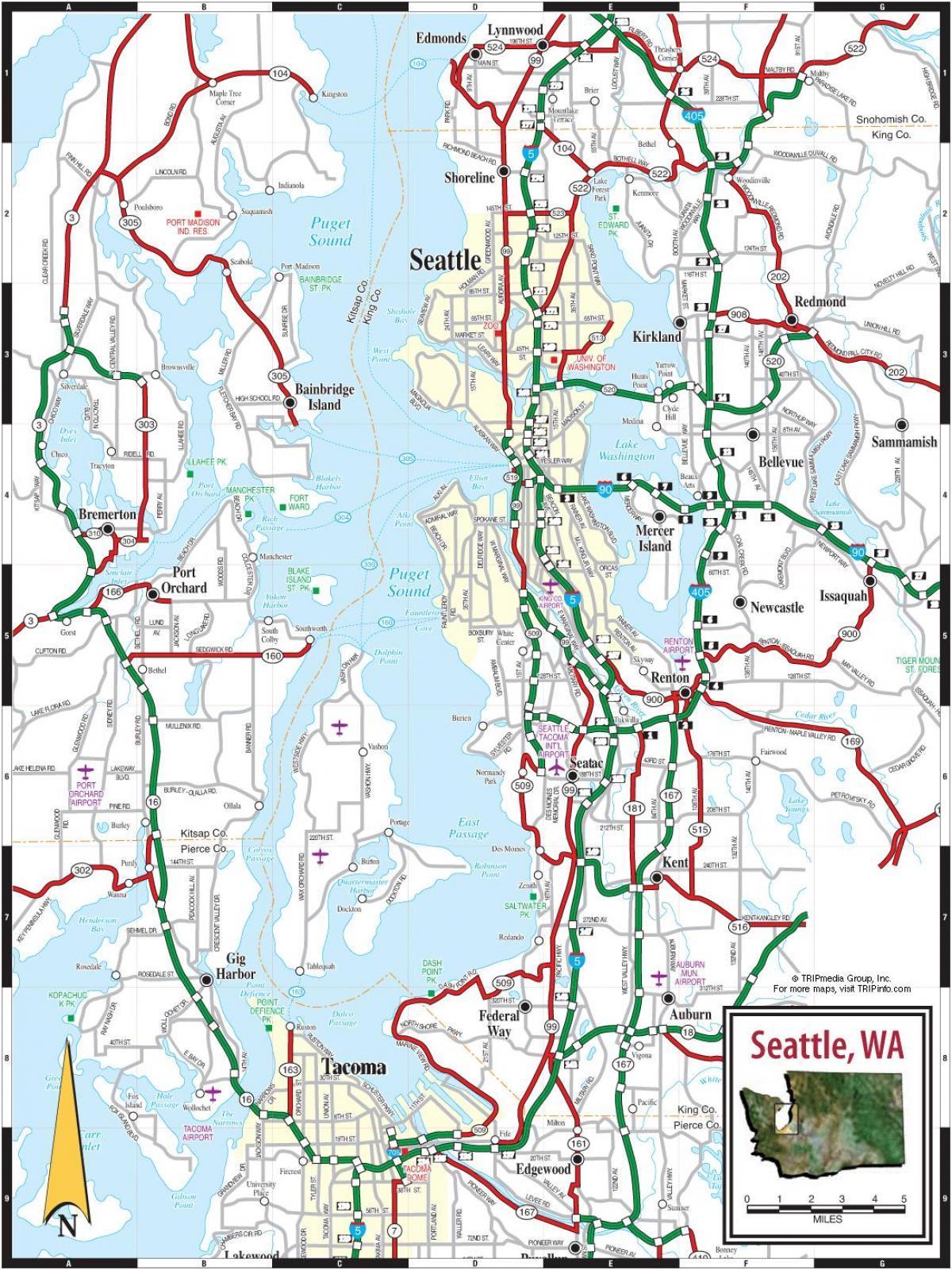 Driving in Seattle, Washington, can be challenging—rain, rush-hour traffic, temporary HOV lanes, one-way downtown streets, hard-to-navigate hills, and unexpected toll roads add to the confusion (see Seattle roads map). Seattle has managed to land itself on a few lists, and it regularly appears among the cities with the ​worst traffic in the country. Seattle has a ton of bicyclists, many of whom are responsible and obey the biking rules of the road, some of which may be confusing to motorists. City and residential-area streets alike often go from one to two lanes. Sometimes streets have room for parking and a single lane of driving but might look suspiciously like a two-lane road. Many quaint and historic neighborhood streets in Seattle will have cars parked on both sides of the road, which turns a two-way street into a single-lane street with room for one car at a time.

As of 2010, Seattle has an inventory of 3,952 lane-miles (12-ft) of street pavements. The busiest streets, arterials, account for approximately 1,540 lane-miles of the system as its shown in Seattle roads map. Arterials are the city most critical connectors and are the principal means by which people and goods move about the city. King County street naming and numbering system developed over the course of the twentieth century. It was aimed at developing a clear and concise street designation system intended to lend increased facility to the location of addresses. A numbered grid pattern of avenues and streets, an extension of and compromise with the City of Seattle street system, is the centerpiece of the system. The system had its beginning in 1920 and 1921 with the passage of two Commissioners resolutions (690, 730) which extended the grid north and south from what were then the city limits of Seattle. The next surge followed in 1930 with the adoption of two more sizable resolutions (3709, 7558) which further extended the grid south and north of Seattle. Preference was given to numbered avenues and streets rather than named roads.

As of 2010, Seattle has an inventory of 3,952 lane-miles (12-ft) of street pavements as you can see in Seattle roads map. The busiest streets, arterials, account for approximately 1,540 lane-miles of the system. Arterials are the city most critical connectors and are the principal means by which people and goods move about the city. The remaining 2,412 lane-miles are nonarterials, which carry lower volumes, but nonetheless serve a variety of users. Most non-arterials are residential, but some also support commerce and industry in areas such as the Greater Duwamish, Ballard, the International District, and First Hill. These totals do not include alleys or parking lots, where no inventory information is available.