You can find on this page the Seattle metro map to print and to download in PDF. The Seattle metro map presents the network, zones, stations and different lines of the metro of Seattle in Washington - USA.
The fares for trips on the Link Light Rail trains depend on the number of stations that you decide to travel to (see Seattle metro map). In other words, the light rail fee depends on the distance travelled. 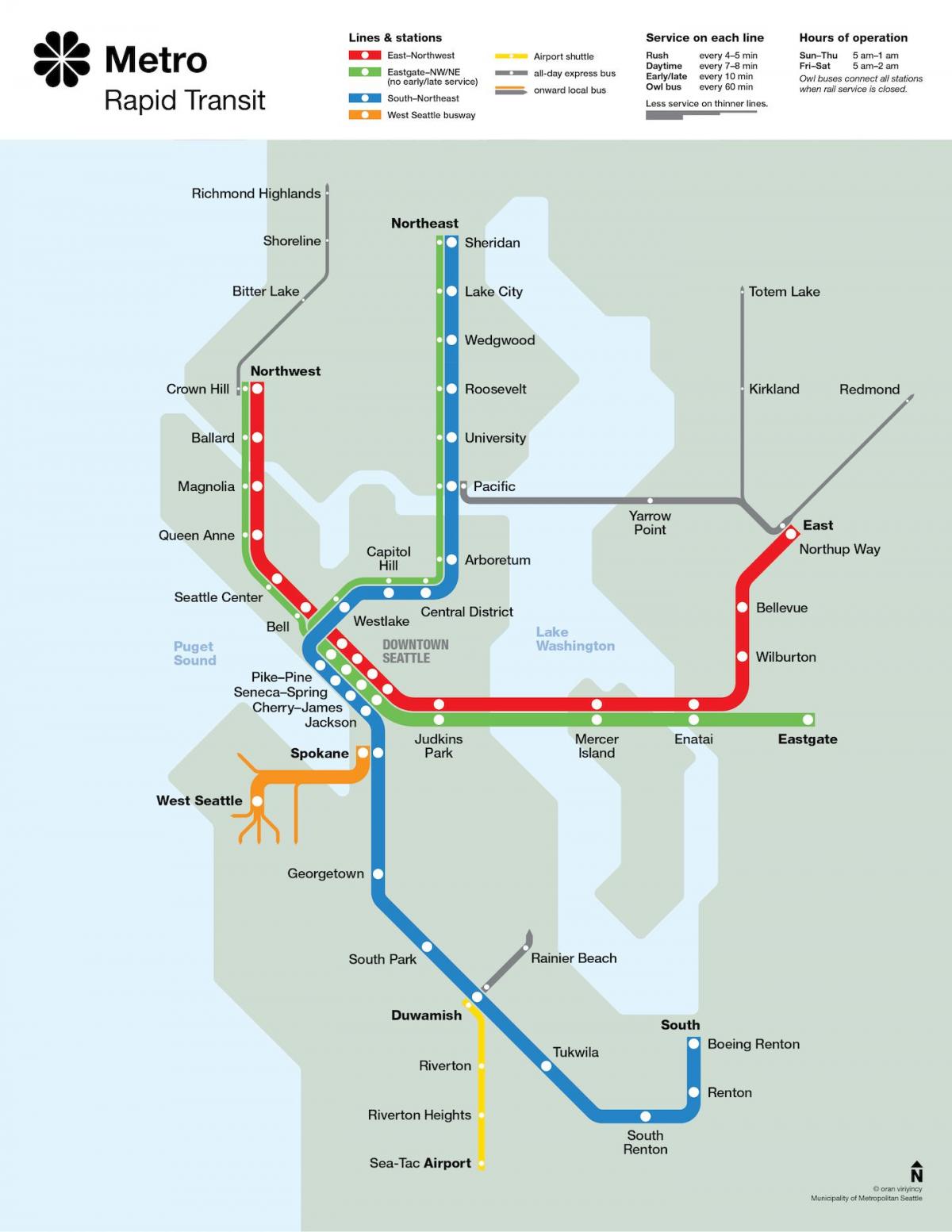 King County Metro Transit provides bus service in downtown Seattle and outlying neighborhoods in King county. Download the mobile app for on-the-go transit information, available for iPhone and Android. Time-tables and route maps are available at the Transit Information Center in the tunnel under Westlake Center at 4th Avenue & Pine Street, or can be found on the King County Metro Transit website. Adult Fare: $2:75–$3.25 (ORCA cards) as its shown in Metro map Seattle. Paper transfers are provided for free on Metro buses when paying with cash, however they are not accepted by other transit systems (including Metro-operated Sound Transit buses). Metro works to ensure that paper transfers provide a two hour transfer window, however in some circumstances it may be slightly longer or shorter.

King County Metro is Seattle main method of public transportation – Seattle vast network of buses. The system crisscrosses downtown Seattle and can take you as far north as Mountlake Terrace and as far south as Federal Way. Riding the bus might take a little longer than driving, depending on whether the route is an express route or has stops along the way, but it will help you avoid paying for parking or navigating Seattle traffic. The base fare is $2.75 with discounts for youth, seniors (with Regional Reduced Fare Permit), and kids 5 and under are free as its shown in Metro map Seattle. Fares are due when you board a bus and you can pay either with exact cash (or forfeit your change if you do not have the exact amount as fare boxes do not give change), with a preloaded ORCA card, with bus tickets, or with a Transit GO ticket, which are available via the Transit GO app.

The Link Light Rail has two main lines: Central Link and Tacoma Link. This light rail has a total extension of 35 kilometers, and a total of 21 stations. The two routes have no connection between them. The price of the tickets is calculated based on the distance travelled. The prices range from 2.25 $, for short rides, to 3.25 $, for the longest rides. The Link Light Rail business hours are from 5:00 am to 1:00 am, from Monday to Saturday as its mentioned in Metro map Seattle. The schedule changes during Sundays and Holidays. The Link Light Rail, and it crosses the city from North Seattle to the south of the city. It has a length of 35 kilometers, 21 stations, and two lines. The system had two inauguration dates for each line, even though both lines belonged to the same project and the construction works for both lines began almost at the same time. The Tacoma Link line began to operate on the year 2003, while the Central Link line began operations on 2009. 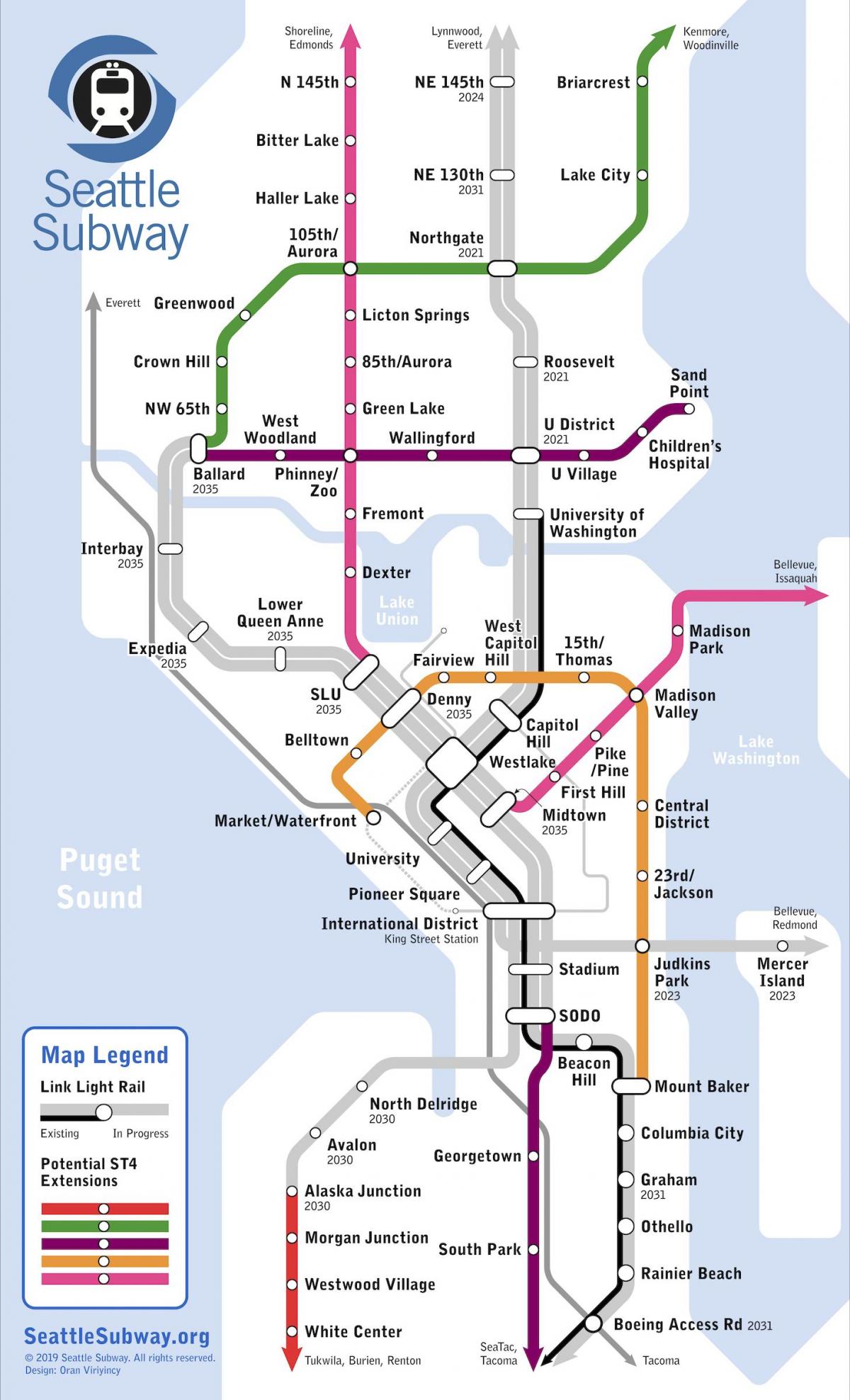 Seattle Subway envisions a city and region that is fully connected by fast, reliable high capacity transit; where local travel via a complete, renewably-powered rapid transit system is the best option; and where everyone in Seattle has convenient access to one of America foremost transit systems. We accelerate rapid transit investments by organizing grassroots support for fast, reliable mobility options that reduce car use (see Seattle subway map). Seattle Subway organizes a community of grassroots transit supporters to channel public demand for fast, reliable high capacity transit into tangible accomplishments. We advocate for accelerated rapid transit investments for a connected region to advance projects that reduce car use by providing all people with fast, reliable alternatives.

The Link Light Rail has two main lines, and it has a total of 35 kilometers of railway length and 21 stations as you can see in Seattle subway map. The light rail transports over 80 thousand users daily, resulting in a yearly ridership of approximately 24 million passengersp. The two routes have no connection between each other since they both offer transportation on different regions within the city. Central Link: It began operations on July 18th, 2009. It is 32.4 kilometers long, and it offers service to 16 stations. Its journey starts to the north of the city, at Washington University, and then goes through downtown Seattle, until it finally reaches the south of Seattle, at the region of SeaTacp. Stations: University of Washington, Capitol Hill, Westlake, University Street, Pioneer Square, International District/Chinatown, Stadium, Beacon Hill, Mount Baker, Columbia City, Othello, Rainier Beach, Tukwila International Boulevard, SeaTac/Airport, Angle Lake.

Tacoma Link: this line began operations on August 22nd, 2003. It has 2.6 kilometers of length, and it is divided in six stations as its shown in Seattle subway map. Its journey starts on the northern end at the center of the Tacoma neighborhood, and it travels throughout most of the region. Its journey ends near the Tacoma Dome. Stations: Theater District, Commerce Street, Convention Center, Union Station, South 25th Street, Tacoma Dome. The tickets to board the Seattle Link Light Rail can be acquired at ticket vending machines at stations, through the use of the Transit GO Ticket app, or, instead of using tickets, you could buy the refillable cards called ORCA. The Transit GO Ticket app is available for free on the application online stores of mobile phones.