You can find on this page the Seattle buses map to print and to download in PDF. The Seattle bus system map and the Seattle trolley map present the network, stations and lines of the buses and trolley of Seattle in Washington - USA.
You can pay to ride Metro buses with cash, a Metro transfer, a Metro ticket, or an ORCA card as its mentioned in Seattle bus system map. You will need to tap your ORCA card, deposit exact fare or ticket in the farebox at the front of the bus or show the driver your transfer. Drivers do not carry money. 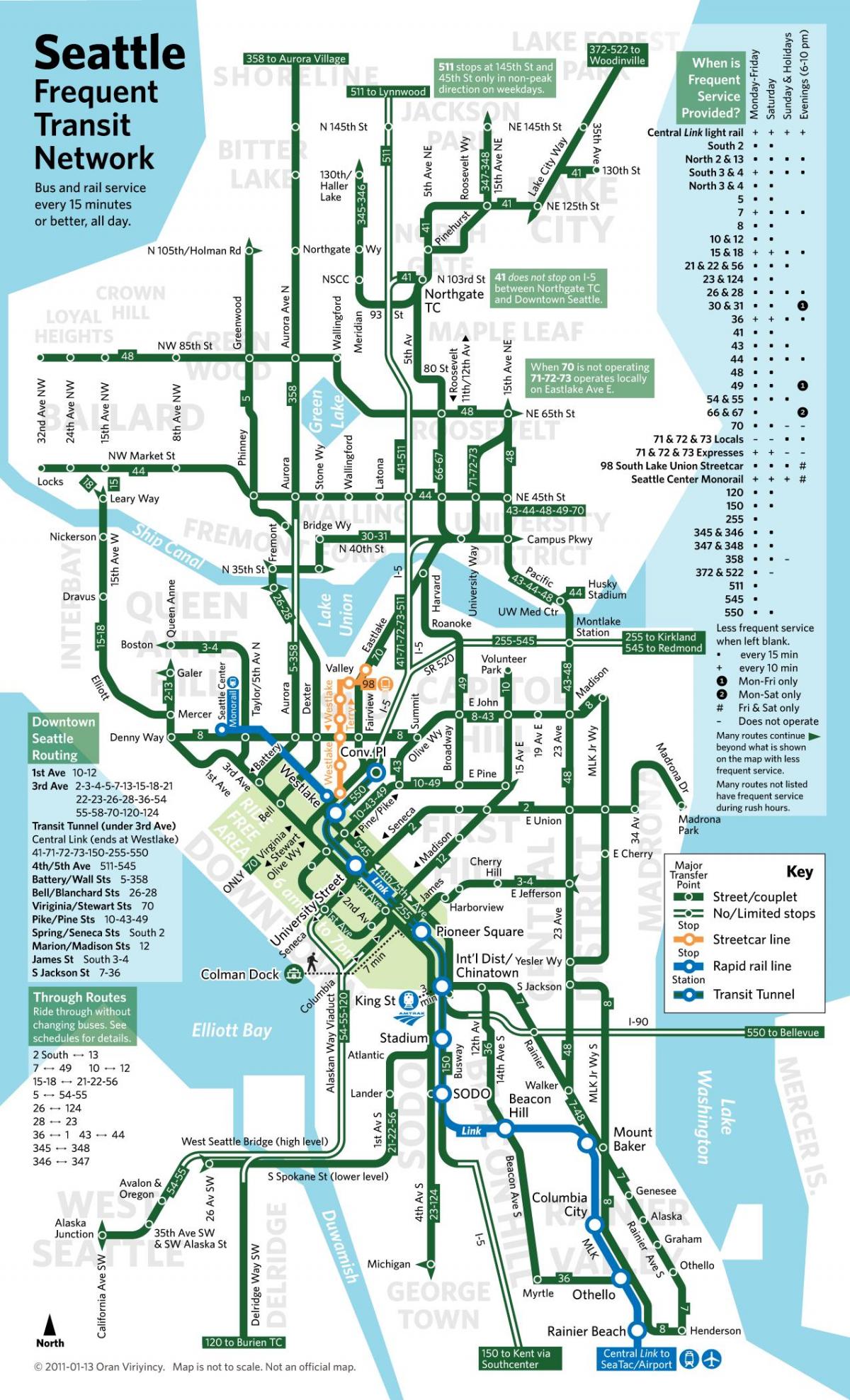 Seattle Metro bus and electric trolley system covers all of greater Seattle. Fares are based on zones and travel time. Off-peak fares for all zones are $2.25 for adults, $1.25 for ages 6–18. During peak commuter hours, adult fares go up to $2.50 for 1 zone, $3.00 for 2 zones; senior and children fares remain the same. Use exact change and pay on the bus. Sound Transit operates two express bus routes that pickup and drop off passengers at the sound end of the main terminal on our lower drive. The ST Route 560 serves Burien, Renton, and Bellevue, WA. The ST Route 574 heads south and connects passengers with Federal way, Tacoma, and terminates in Lakewood, WA as you can see in Seattle bus map.

At the bus stop, look for your route number on the bus stop sign (see Seattle bus map). As the bus arrives, check the route number and destination above the front window. Enter the bus through the front door and pay your fare. Seats in the front of the bus are reserved for elderly people and people with a disability. You can pay to ride Metro buses with cash, a Metro transfer, a Metro ticket, or an ORCA card. You will need to tap your ORCA card, deposit exact fare or ticket in the farebox at the front of the bus or show the driver your transfer. Drivers do not carry money. When the bus nears your destination, pull the cord above the window to let the driver know you want to get off.

Metro is the local public bus system that operates throughout King County. Route 150 as its shown in Seattle bus map is an express bus that will take you straight to downtown Seattle. From Tukwila, catch Route 150 at Westfield Southcenter. From Sea-Tac International Airport, catch Route 156 to Westfield Southcenter and hop on Route 150. These handy cards provide entrance to area buses, trains and ferries. It is an electronic wallet to use like cash to pay your fare. Anytime you use your card, the fare due is deducted. ORCA is accepted on most transit options in the Seattle area, including Community Transit, Everett Transit, King County Transit, Kitsap Transit, Pierce Transit, Sound Transit and Washington State Ferries.